In custom software development, it’s not uncommon for companies to deprioritize automated end-to-end (E2E) testing1 in order to get to the desired solution as quickly as possible and for as little cost as possible. It’s understandable why this happens, because the initial application doesn’t start out large and complicated. Isn’t unit testing2 good enough? Isn’t a bit of manual testing3 enough to show that the integrated components are working? Why add tens of thousands of dollars to the cost of a new project for something that the user never sees?

At odds with this reasoning is the fact that businesses also value reliability, quality, and customer satisfaction. It might make sense to delay automated E2E testing when the project is in its infancy; however, as soon as an application is deployed to production (and will be for the foreseeable future), it’s time to talk about adding those E2E tests.

End-to-end testing is useful because it provides assurances that the system as a whole, and all of its interconnected components, are working together as expected. This is especially important in web development where parts of the system are out of the developer’s control. Take browser compatibility, for example. Unit testing your Java code will not guarantee that the application will behave the same way across different browsers. Nor will it ensure that dependent systems under another team’s control will not introduce changes that break your own system.

In this article, we’re going to cover how to add E2E tests to a Java 8 application using Cucumber and Selenium WebDriver. Cucumber is currently the most popular tool for behavior-driven development4 for software development companies, and Selenium WebDriver is the most popular tool for web browser automation. Here is a brief highlight of the benefits of using these tools:

Collaborating with Your Business Users

Let’s talk for a moment about traceability6. How can you be sure that your software requirements are met by the product being delivered? Consider the following snippet. This is a feature (the “living documentation” for your application mentioned above) as written in the Gherkin7 syntax:

Background:
Given I use the Chrome browser
And I navigate to the Zirous home page

Feature written in the Gherkin syntax

This is something your business users can read, understand, and even help to write. It clearly defines the expected behavior for the software. You could even hand this to a tester to perform the test manually. However, it can be a little verbose, considering you may need to write dozens of scenarios to fully test a feature. This is where the Scenario Outline comes into play. The next snippet is the same feature written with a Scenario Outline:

Background:
Given I use the Chrome browser
And I navigate to the Zirous home page

Scenario Outline: Searching within the menu bar
When I click the magnifying glass in the header
And I type “<Search Input>”
Then the page title should contain the search input
And the search results should include:
| Result A | <Result A> |
| Result B | <Result B> |

In this way, you can test a multitude of inputs to make sure you’re hitting any edge cases in the application logic. The great thing about Cucumber is that, because these feature documents drive the tests underneath them, they allow you to clearly trace the requirement through to its implementation and subsequent testing.

Before We Get Started

For this tutorial, I’m making the following assumptions about you, the java developer:

Assumptions About My Setup

Here are the technologies I will be using. You might be using a different IDE or different library versions, but this at least gives you an idea of where I’m coming from with my instructions:

You’ll notice I’m using an alpha version of Cucumber and a release candidate (RC) version of Selenium. These are the latest versions at the time of writing, so I decided to use them despite the fact that they’re not stable releases yet. As with all the dependencies, use discretion and best practice when choosing which versions you’ll use. As long as you keep the major version the same, the code presented in this tutorial should work fine for you.

Assumptions About the Project

For this tutorial, I won’t go into any detail about what kind of web application you’re running. In fact, to simplify this, I’m not even going to put any “Hello World” web application code in place. I’m just going to assume the tests will be run against a running instance of your application.

Specifically, for this demo I’ll be running my tests directly against the Zirous website. We’ll test the search functionality of the website by simulating a user clicking on the magnifying glass in the website header and searching for a given topic. I’ve chosen search terms that should surface information about some of the different solutions that we offer as a software development company.

Create a pom.xml file in the root directory of your project. Copy/paste the following contents into it, and be sure to update any project-specific attributes to match that of your project. Please also upgrade any of the dependencies to the latest matching major version.

Contents of the pom.xml file

Once that’s ready, run the mvn compile command, which will (among other things) attempt to locate and download the dependencies. If there are any errors with the dependencies, correct them before proceeding.

The web drivers used by Selenium do not get installed with Maven. They also are very dependent on which browser (and which browser version) you are using. For each browser you want to test with, you need to find the correct web driver, download it, move it to a relevant location on your file system, and then eventually tell Selenium where to find it. Let’s start with getting it in the right place on your computer. For this tutorial, I’ll cover three common browsers: Google Chrome, Mozilla Firefox, and Microsoft Edge.

If you’d like, you can copy and paste one of the features given above to get started; however, the Gherkin syntax is pretty simple, so you might as well take 5 minutes to look it over and then write a feature for your own project.

The feature file should be placed in the “src/test/resources/features” directory, as shown below.

Your JUnit test files end up being fairly short, because all the actual assertions are performed in the Cucumber step definition files. Later, we’ll add some additional logic to facilitate Selenium setup/teardown. The important thing to notice here are the annotations at the top of the class indicating it will be run with Cucumber and pointing it to the feature(s) it will be using.

Basic (though not yet complete) JUnit test definition

We’re going to add a few small changes to this test later when we set up Selenium.

Step definitions are the actual code implementation of your business user-friendly feature files. They’re written as java classes, and each step definition file should live in the same folder (or in a child folder) of the JUnit test that will be using it. This helps the test find any associated step definitions. 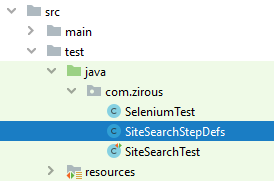 For the most part, I’ll let the code speak for itself; however, I will offer the following points to pay attention to: 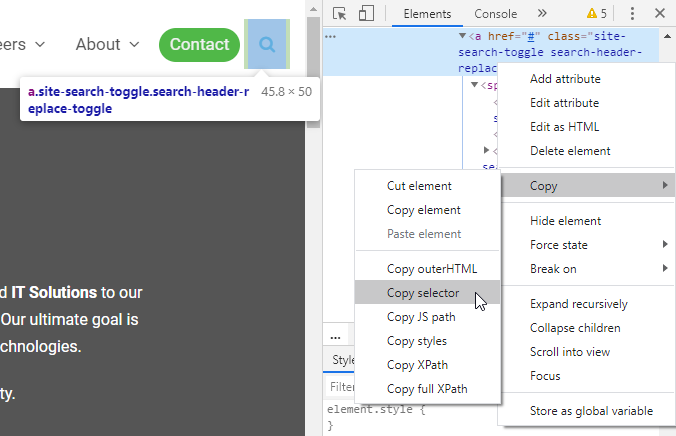 Here’s the code for our step definitions file:

Finally, let’s encapsulate all the driver setup logic in a single class that we can have our JUnit test classes extend. This will promote code reuse and keep our Test and StepDef classes clean. It also uses a static driver variable for all tests, so this setup probably won’t work if you plan to run tests in parallel. Don’t forget to update the file paths to wherever you chose to place your web drivers.

The last thing we need to do is to update our JUnit test to extend the SeleniumTest class. We also add a JUnit @AfterClass method to perform cleanup actions with the web driver.

Updated version of our SiteSearchTest class

It’s likely the IDE you’re using has built-in capabilities for running JUnit tests in a Maven project. If not, however, you can run the tests using the mvn test command from the command line. Below are my test results after running in IntelliJ IDEA:

At this point, you have successfully set up some basic end-to-end testing for a project using Java 8, JUnit, Cucumber, and Selenium WebDriver. Congratulations! There are many more features of Cucumber and Selenium to explore while writing your tests, but the major hurdles have now been cleared. Application development must include robust testing to ensure product quality, and by adding end-to-end testing you have taken a step in the right direction for long-term success. If Zirous can be of any assistance, please don’t hesitate to drop us a line! We have a long history of delivering value to clients to help make their organizations successful, and we would love to help you achieve your goals as well.

NOTE:  All code mentioned in this tutorial can be found in the following GitHub repository: https://github.com/KrashLeviathan/selenium-cucumber-demo

1 End-to-End Testing is a type of testing in which business processes are tested from start to finish under production-like circumstances. [ISTQB Glossary]

2 Unit Testing (or Component Testing) is a test level that focuses on individual hardware or software components. [ISTQB Glossary]

3 Manual Testing is a type of software testing where testers manually execute test cases without using any automation tools. (https://www.guru99.com/manual-testing.html)

4 A collaborative approach to development in which the team is focusing on delivering expected behavior of a component or system for the customer, which forms the basis for testing. [ISTQB Glossary]

5 JUnit is a unit testing framework for the Java programming language. [Wikipedia]

6 Requirements traceability in particular, is defined as “the ability to describe and follow the life of a requirement in both a forwards and backwards direction (i.e., from its origins, through its development and specification, to its subsequent deployment and use, and through periods of ongoing refinement and iteration in any of these phases)”. [Wikipedia]

7 Gherkin is the language that Cucumber uses to define test cases. It is designed to be non-technical and human readable, and collectively describes use cases relating to a software system. [Wikipedia]

8 Document Object Model – In this case, I’m referring to the expandable tree of HTML elements in the browser developer console.

At a high level, the software development life cycle includes planning, analysis and design, building, testing, and support. In this post we take a deeper look at one of the most important and complex pieces: testing.

Get Groovy: 8 Questions about the Dynamic Language

Microservices: Breaking it Down

It has been a longstanding goal of software companies to get…